HMIPS awarded Investors in Volunteers Award for the second time 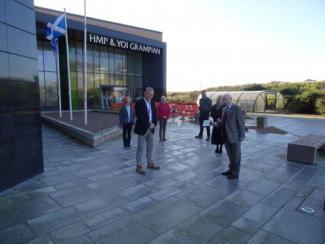 HMIPS are delighted to be awarded the Investing in Volunteers Award for the second time.

To mark the occasion, Graeme Neill, Operations Manager who worked with Volunteer Scotland to achieve the Award and Christopher Johnston, Prison Monitoring Co-ordinator from HMIPS, along with Tina Harris, Amanda Hawick and Rachael McLean all Independent Prison Monitors at HMP Grampian were presented with the award by Brigadier Hugh Munro, former Chief Inspector of Prisons and now Chair of the Scottish Prison Service Advisory Board, outside HMP Grampian yesterday.

‘Independent Prison Monitors are volunteers from our local communities and are supported by a team based within HMIPS and an Advisory Group with expertise in human rights, criminology, education, prisons and healthcare.

In 2017 HMIPS successfully achieved the Investing in Volunteers Award.  At that time independent assessors from Volunteer Scotland looked very carefully at their relatively new practices and procedures, and highlighted new ways of working that were targeted at benefiting the volunteers and their volunteering experience.  It was also helpful in clarifying a number of staff roles and how they work with their volunteers.  With this first award came a raft of further recommendations that HMIPS have worked hard over the last three years to meet along with maintaining a good quality of service to their volunteers.

I am delighted to report that the hard work undertaken by the HMIPS team over the last three years has been recognised and that in 2020 they have again been awarded the Investing In Volunteers award, ensuring that there is a sound basis in place for further improvements and developments over the coming years. The quality of the support and training which HMIPS provides our volunteers has been recognised, which helps underpin the strength of the whole independent monitoring system.

I would like to take this opportunity to thank the volunteers for their incredible commitment and continued support in ensuring that prisoner’s rights are upheld.’

“As a previous Chief Inspector of Prisons, I am delighted and very proud to present this award to Her Majesty’s Inspectorate of Prisons for the utterly dedicated work carried out by their volunteers over the last three years. To be awarded the Investing in Volunteers award, for a second time, shows what inspirational work the Independent Prison Monitors carry out in prisons, on behalf of our communities. It is through their commitment and hard work that prisoners can be properly represented and that we can be assured that the treatment of prisoners and the conditions in which they live are up to an acceptable standard.

As Chair of the Scottish Prison Service Advisory Board, it gives me great satisfaction that such volunteers are part of a system which allows the Board to consider the further improvements and developments that will be needed in the coming years.

I would like to thank all Independent Prison Monitors for their extraordinary service and commitment which helps to ensure prisoners’ rights are upheld.”